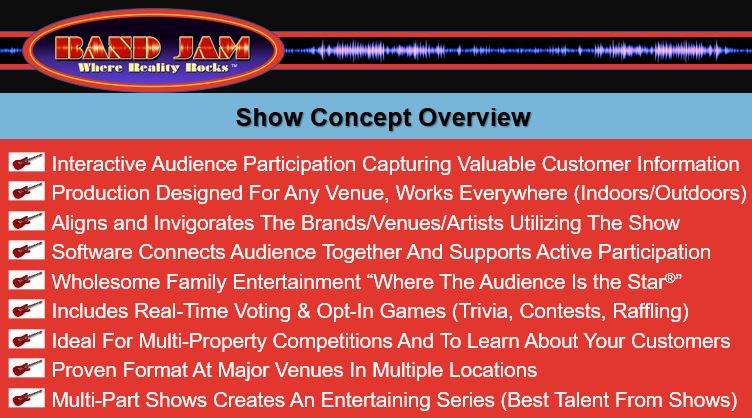 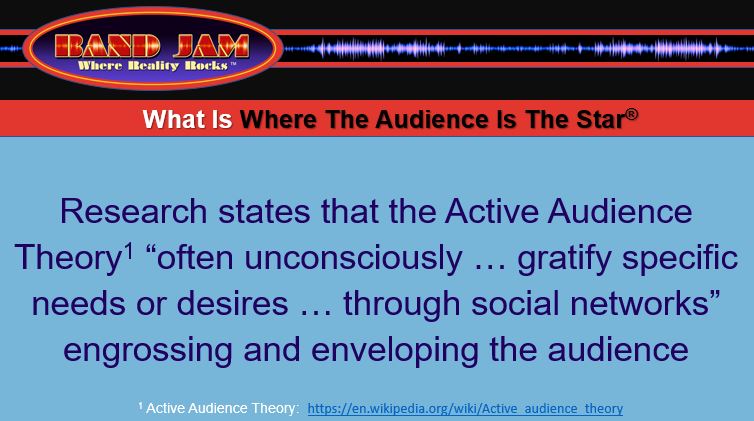 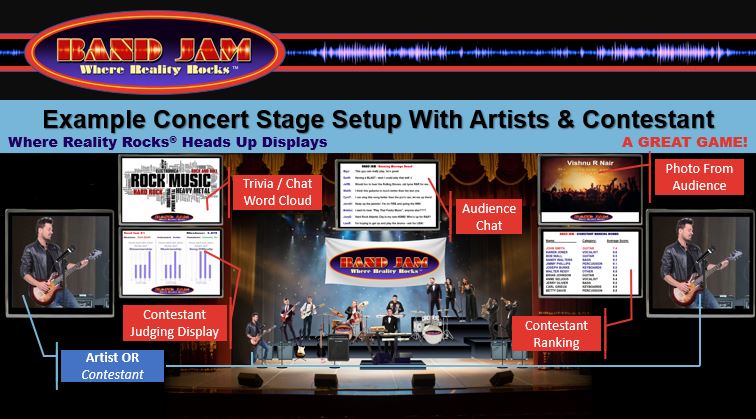 We started Band Jam at the DAMA International (Enterprise Data World) Conferences as 1 in 4 data 'geeks' are musicians. The crowds loved it and we brought in bands to back performers and the host invited special guests (like Lynyrd Skynyrds' guitarist) and the crowds went wild. We added the digital component and engaged the audience completely.  It became an event that was held at six different conferences in five different cities in the US to rave reviews.

The enjoyment of seeing others so completely involved and mesmerized into the show - Rooting for their favorite musicians, Texting thoughts and pictures to the big screens, Answering trivia questions about the event/ venue/genre, playing stage games like "Pick the Guitar Case" and "Spin the Drum Stick" - generated the team's passion to turn this concept into a reality.  We created and protected the Intellectual Property, scripted the show, worked with PR and marketing firms and here we are today with a great show event and a recognizable brand.

The Band Jam team is led by host Robert Abate, accomplished professional touring musician and acclaimed IT industry thought leader, conference speaker, and published author. He previously was Sr. Director EIM & Analytics for Kimberly Clark and Walmart. He has played with The Byrds, Harry Chapin, Nerds, Girl Talk, Salvation, Riverside, The Other Side Band, Jukebox 45 and many others.

Robert Abate teamed with Carina Sayles for Public Relations & Branding, who for the past 15 years has led a PR and brand strategy firm in NYC (Sayles & Winnikoff) and previously held management positions at CBS Network, Disney and Paramount in developing the brand and in launching the digital and print public relations campaigns.

Robert next partnered with the well-established intellectual property attorney Brian K. Johnson who has held a corporate counsel position in a number of organizations and now runs his own IP firm.  He secured copyrights on the concept and script for an entertainment data show and secured the intellectual property (soon to be registered marks) of Where Reality Rocks™ and Where The Audience Is The Star™.

Robert was fortunate to meet Louis J. Frezza, a sales and marketing expert in the music industry for over 40 years in early 2021.  Louis is a marketing visionary and innovator who has led a wide range of businesses to launch, re-brand, and flourish. He has worked in numerous business development and marketing positions and has extensive experience in media and entertainment as a producer and artist manager. His expertise is in business start ups and transformations and has a proven track record growing businesses organically utilizing creative marketing to build brands and revenue. Lou, as he is affectionately known, is the driver behind the corporations success and is leading the brand awareness and joined Band Jam LLC as Chief Marketing Officer.

Robert is a world touring accomplished musician and often hosts jams with other professional musicians. He has played at music festivals as a guest in GA, FL, NJ, NY and CA.  Most recently the FL Keys Music Festival (one of his favorite locations to play)...

Carina is the CEO at Sayles & Winnikoff Communications and an accomplished PR and media specialist in entertainment. Previously, she was an executive with major entertainment organizations including CBS Network, Disney and Paramount.  She brings a wealth of experience to the show and team.

Brian has been corporate counsel for a number of corporations and brings with him a wealth of Intellectual Property and Corporate Contract experience. He has been a close friend of Robert's for many years.

Louis worked directly with the Andretti family (world renowned racing family) to produce the “Andretti Family Documentary”. He developed and implemented an insider view of the fast pace world of international motorsports. He represented and co-wrote with Oscar and Golden Globe winning songwriter Franke Previte “I’ve Had The Time Of My Life” – the theme from Dirty Dancing and ASCAP Song of the Year.  He collaborated with Lance Quinn, the producer of Bon Jovi, Talking Heads, Meco Does Star Wars and others. Managing partner of Harmony Brook recording studios built by 48-time Clio Advertising award winner Ed Labunski. While managing Harmony Sweepstakes winner “Graffiti Tribe”, he worked closely with award winning Preston Glass (Kenny G BMI Songwriter of the Year with “Miss You Like Crazy”). He managed “Hit the Ground Running” – the group with the distinction of the highest selling CD price on e-Bay ($1,200). Louis was the creative director for the groundbreaking historical 12-part PBS series “A Common Thread” which featured the famous fabric collection of Mr. Manny M. Kopp. He currently represents singers and songwriters.

Send Us A Show Request

We would love to hear from you regarding your unique shows needs and venue.  We have performed at smaller events to large concert halls and enjoy working with venue teams.